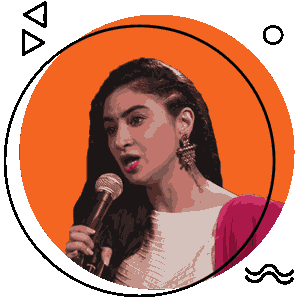 Priya Malik is a lot of things! An actress, activist, educator, a spoken word poet, a storyteller but most importantly, a writer/performer whose recent viral work "2019 main 1999" is a testimony to her distinct voice. Priya has also hosted the first spoken word poetry show on national television called Uncensored News With Priya delivering current affairs (political and social issues) in a poetic format on prime time news. She recently addressed the assembly at the UNESCO head office in India for World Education Day and is currently awaiting her first film, "Sheer Qorma", based on LGBTQIA issues with Shabana Azmi, Swara Bhaskar, and Divya Dutta, to be premiered at BFI. In terms of her poetry experience, she has written and performed for various brands, including Malala Education Fund, Asian Paints, Tinder, Alt Balaji, Hotstar, Philips, and Hindustan Unilever Limited, to name a few. Her work has been featured on some of India's biggest spoken word platforms, such as Kommune, UnErase, Spill, Amazon Prime, and Tape A Tale. She also wrote and performed the viral Black and White Women's Day anthem, which garnered over 5M views. Her work has received extensive coverage in media due to the fluidity of her writing and performance style. She writes and performs in Hindi, Urdu, and English and is currently writing a book for Harper Collins. Priya has recently pressed pause, rewind, and reset in her artistic direction and can't wait to go back in time and tide.

All Sessions by Priya Malik