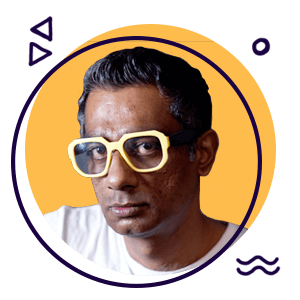 Referred to by CNN as 'India's most dangerous filmmaker’, his films are urgent, politically charged, sexually explicit and will provocate and shock you. From Gandu to Garbage, one of the most controversial indie-filmmakers in India - Q.

Known for socio-politically charged and rap music, indie-filmmaker Q is currently based out of Goa. His film Gandu was an official selection at the Berlinale, and it travelled to more than 60 film festivals worldwide, becoming an instant indie cult phenomenon. Brahman Naman had its world premiere at Sundance and was picked up by NETFLIX as its launch film for India. Q’s Tasher Desh, Ludo and Love in India travelled across the globe, winning several national and international awards. Seven years post-Gandu, Q’s new feature ‘Garbage’ recently saw World Premiere at the Berlinale, 2018 and was nominated for the Teddy Awards. Referred to as ‘India’s most dangerous filmmaker - by CNN, Q’s film production house, ODDJOINT, is focused on creating alternative content, and is arguably India’s first dedicated production company to focus on socio-politically concerned content known for it’s high production value, while always furthering the art of dissent.

All Sessions by Kaushik Mukherjee